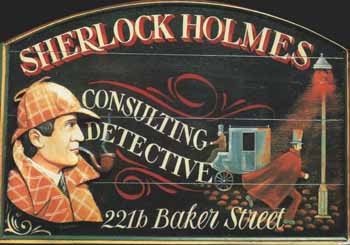 "know-all ignoramus!!  I could have struck the arrogant, prying bastard!!"

"Eliminate all other factors, and the one which remains must be the truth" - well Holmes got it all wrong on Flashy...

Extract Flashman (from Tiger) Damned unnerving it was, to feel those two faces peering at me through the gloom, while I tried to sham insensible ...

[Holmes attempts to eliminate his factors while describing Old Flashy...-] "not a military man; he is not English, ..German - ...he has certainly studied at a second-rate German university, but undoubtedly he has been in America ... He is known to the police, is currently working as a ship's steward, ... and will, unless I am greatly mistaken, be in Hamburg by the beginning of next week - provided he wakes up in time. ... he found his way here via Piccadilly Circus.  ... Observe that the man wears a pea-jacket, with brass buttons, which is seldom seen except on sea-faring men. Add that to the patent fact that he is a German, ..The duelling scars.. - mark of the German student, he received them not at Heidelberg or Gottingen, but at some less distinguished academy. This suggests a middle-class beginning from which, obviously, he has descended to at least the fringes of crime...

The silver flask in his hand was not honestly acquired by such a seedy drunkard as this,  which must inevitably have attracted the attention of the police.  Some care has been taken with the moustache and whiskers, no doubt to compensate for the ravages which drink and evil living have stamped on his countenance...

Furthermore, since I noticed from the shipping lists this morning that the liner Brunnhilde has arrived in London from New York, and will leave on Saturday for Hamburg, I think we may reasonably conclude, bearing in mind the other points we have established, that here we have one of her crew, mis-spending his shore leave... how did I know he got here by way of Piccadilly?  ...he reeked of bourbon whisky [actually best Brandy], which is not easy to obtain outside the American Bar, and his condition suggested that he had filled his flask at least once since coming ashore ..."

The Adventure of the Empty House - by Watson Download

See Flashman and the Tiger

Celebrated narrative of Dr Watson described the Colonel's capture in "The Adventure of the Empty House" (see The Return of Sherlock Holmes, by Sir Arthur Conan Doyle). Moran was apprehended by Holmes and Watson in the act of trying to murder the former; Moran's motive was revenge (and no doubt fear that Holmes would identify him as the murderer of the Hon. Ronald Adair, whom Moran had killed some days previously).

Flashman; of course, had no inkling of all this at the time, as his story shows. He was not to know that Moran, after retiring from the Indian Army, had turned his uncanny marksmanship to account by becoming a professional assassin in the employ of Holmes's arch-enemy, Professor Moriarty, or that the Colonel eked out his contract fees by card-sharping, as in the case of Stanger and Adair. After his arrest by Holmes and Watson, Moran was charged with the Adair murder, but escaped the gallows.

This distinguished work confirms the date of Moran's arrest given by Flashman - April 5, 1894.

Watson account tells how in disguise, Sherlock Holmes returns from his supposed death at the hands of Moriarty, much to the astonishment of his friend, Dr. Watson. After explaining where he's been for three years, Holmes leads Watson to an empty house where they find Moriarty's second in command, Sebastian Moran, firing his air rifle across the street at a moving silhouette of Holmes in the study of 221B. Moran is captured and revealed as the murderer of an innocent man who was about to expose his cheating at cards! Great evocative atmosphere, puzzling explanation of Holmes' absence, satisfying conclusion, though raising question of why Moran is never punished for the murder.

Flashman's involvement is personal, and is an account of his motives and attempt to murder Moran himself, the murder being interrupted by Holmes arriving on the scene.

See Flashman and the Tiger

It is, of course, a trifle, but there is nothing so important as trifles - been on the Sherry again Watson?

Sherlock Holmes was born around 1854-son of a country Squire, Grand-Son of the Sister of the artist Vernet.
Holmes has an Older brother-Mycroft, who also is something of a detective-assisting in a few of Holmes's cases.

Sherlock Holmes for more than a century his name has been known in every country of the world; and not only his name, but his appearance too. The hawk-like features and piercing eyes; the dressing-gown and pipe; the deerstalker cap and magnifying glass - these details are so familiar that if he were to appear amongst us today we should know him at once. He is still however an enigmatic figure, as wrapped in mystery as the crimes he tried to solve, and as in most legends, it is often difficult to separate fact from fiction

Holmes was a Bohemian. He alternated between days or weeks of listless lassitude and similar periods of intense engagement with a challenging case or with his hobby, experimental chemistry or with his violin. He was an occasional user of cocaine, though Watson describes this as Holmes\'s \"only vice” bar of course his pipe, that was forever between his lips, his tendency to bend the truth and break the law when it suited his purposes.   Watson has tried on many an occasion to stop Holmes from continuing with this dangerous habit-and once suspected (wrongly) that Holmes had moved on to Opium.

Holmes would solve these cases for a fee-except on the occasions where he did not charge for his services.
Sometimes the rewards were very large-from £1000 for a missing item-to £12,000 in another case.
Holmes also recieves a Gold snuff-box, a ring and Queen Victoria gave him an Emerald tie-pin!

You are developing a certain unexpected vein of pawky humour, Watson, against which I must learn to guard myself.

"You have a grand gift of silence, Watson. It makes you quite invaluable as a companion.

When one tries to rise above Nature one is liable to fall below it. The highest type of man may revert to the animal if he leaves the straight road of destiny

The ways of fate are indeed hard to understand. If there is not some compensation hereafter, then the world is a cruel jest.

Woman's heart and mind are insoluble puzzles to the male. Murder might be condoned or explained, and yet some smaller offense might rankle.