I'm writing to let you know that a memorial service has been planned for GMF at St Johns, Smith Square, SW1 on the morning of the 8th July at 11.00am. ItĀfs planned that the service will celebrate his life and works, reflect the things that he held dear to him, and with content including readings from his Flashman works by Joss Ackland, along with recollections of his time in the military, his love of adventure and comedy, films etc. Speakers include Melvyn Bragg, Sir Max Hastings and the author and critic D.J Taylor. Alex Norton will also be reading from GMF's McAuslan works. The tone is one of celebration and humour and is expected to last for approximately an hour and a half. The celebration is open to all with no ticket invitations required.

To kick off Flashy's birthday celerbrations in 2000 the society went back to where it all started. Rugby School. Members came from all overthe country, also two members coming from abroad to join in the fun. Rugby school, where of course we did our damnest to get expelled for drunkness, an easy task the last of us crawling to beds about two in morning. Rugby School tour is well worth taking and Harry wasn't wrong about the hospitality of Rugby's pubs some of are great real ale pubs. There is also a good choice of restaurants, of course we finsihed the day with a curry!

Tours of Rugby School
Guided Tours of the School take place every day except Sunday and Monday. They leave at 2.30p.m. from the Museum across the road.
Adults: £2.00 Concessionary: £1.50 Family: £5.00

Visit Rugby School, birthplace of Rugby Football, scene of Tom Brown's Schooldays and Scene of Flashman's scholarly downfall. Home of the poet Rupert Brooke and the School that educated Lewis Carrol. The School Museum tells the story of Rugby, its people and its famous game. 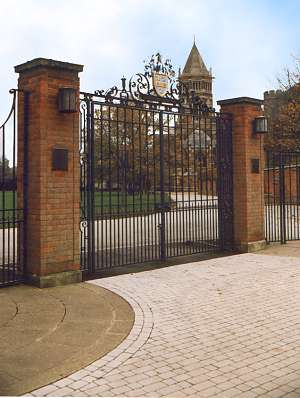 This year to celebrate Flashmanís birthday, 5th May 1822, the society organised a jaunt to visit the King's Royal Hussars in Winchester, the surviving incarnation of the Flashmanís first regiment the 11th Light Dragoons, which went on to become the 11th Hussars ĎPrince Albertís OwnĀE The good old ĎCherry-Pickers!ĀE/P>

I travelled down to Winchester the night before in order to get settled in. The weather couldnít have been better, bringing out all the girls in their shortest summer skirts. Winchester, I observed had more than itís fair quota of girls, in fact the imbalance towards the fairer gender became more obvious when queues of girls started forming to get into the pubs. Girls either had to wait in line, or if they were lucky and accompanied by a boyfriend would be admitted straight away. It wasnít long before a single guy would have several hangers on sweetly asking if he minded terribly if he could escort her and her numerous friends into a bar. I may move to Winchester one day.

Girls and bars aside Winchester is a very interesting and historic city. After strolling around to get my bearings I stepped into the Information centre. Winchester certainly has seen it all: it's been the capital of England, it has been conquered by Normans and ransacked by Roundheads, (and now the Flashman Society.) home of the Doomsday Book. The most famous inhabitant, was Saxon king Alfred the Great. An Arthurian round table hangs in the Great Hall, the last remaining part of Winchester Castle. William the Conqueror took over the English crown after beating Edward the Confessor in 1066. Then good times came to Winchester becoming joint capital with London (William played safe and was crowned in both cities), William also founded the present cathedral, many prominent residents of Winchester were buried in elaborate tombs in this ancient church - from Saxon English kings to the author Jane Austen who died in college Street in 1817.

One other attraction is Winchester College, founded by William of Wykeham in 1382 and one of the best public schools in England. The barracks area is home to no less than five military museums: The Light Infantry Museum tells the story of a modern regiment, which includes the Fall of the Berlin Wall and the Gulf War. Nepalese soldiers are honoured in the Gurkha Museum; The Royal Green Jackets Museum has displays of campaigns and uniforms, and The Royal Hampshire Regiment Museum records the history of the County Regiment.

&#After perusing through Winchesterís history I went to search out the best Winchester had to offer in the way of victuals. The speciality in Winchester turned out to Ďbangers and mashĀE So filled to gills with beer and sausages I returned to the hotel to get a good nights rest.

Saturday morning everyone straggled in generally heading straight for the bar. The sun was out and for those driving down it had been a very hot journey. Once introduced and everybody had got to know the new members we hadnít met before, mainly Dave Edwards. Committee members Mark Willis and Allan Holden also honoured us with their presence. We started out towards the town, on our way we spotted a restaurant called the ĎGurkha ChefĀEand immediately resolved that this was the place weíd be eating in the evening. (The other choice being ĎBangers and MashĀE) Allan then took the lead, surging ahead until we thought weíd lost him. Heíd run straight in the first pub, only to shoot straight out again having decided he didnít like the beer on offer. Bemused we hurried after him into the next establishment where we discussed our plans. Out of the five museums we decided to see the Hussarís, Gurkha and the Green Jackets. Sometime later we did arrive at the barracks. The Hussarís museum was the smallest out of the three, the regiment having only moved there recently, I also discovered that the Royal Hussarís had a Northern base in Preston. [Watch this space. Iím organising a trip there at the request Northern members for mid to late August.] The most impressive levée swords were on display, one which featured battle honours from Waterloo through to include all the battles of the Crimea, taking in a few campaigns in India along the way. An impressive career indeed!

The Gurkha and Green Jacket museum are well worth a visit, featuring a model of the battle of Waterloo and is also staffed by local veterans. The Gurhka museum gives a fascinating history of Gurkha regiment.

We left the museums about 2 Oíclock hungry and thirsty. The cup final had started and pubs were packed with people watching the game, but we easily found a free table in an Irish theme pub where we could chill out. The food was filling and well worth the wait. Dave picked himself a huge steak, I ended up with ĎBangersĀEand Ďbubble and squeakĀEfor a change; then went on to finish Daveís steak and chips for afters.

After lunch we went out into the sun to look around the rest of Winchester. Allan led the way into and straight out of several pubs; too noisy, didnít like the music and didnít like the beer. After aimlessly wondering I managed to steer the group to a pub I had been to the night before located next to the cathedral.

Here, the folk bands who were scheduled to be playing in the Cathedral for a festival that evening were warming up. We joined them for a pint or two.

The ale around Winchester was passable, not that I drank too much beer I was drinking my own concoction: Brandy and Red-Bull. The Brandy kills the taste of the Red-Bull and the Red-Bull bolsters the stimulating effect of the Brandy. A very potent mixture indeed. A cocktail surely worthy of the name ĎFlashmanĀE I hardly slept a wink that night, but still got up at Seven Oíclock in the morning to attend a Sabre Match in Kingís Norton.

The afternoon proceed slowly we took in all the sights and most of the pubs. Mark Willis remained sober, heís a responsible Dad now he tell us. Heís been reading Flashman books to the baby since the day it came out of hospital. Allan was his usual self, that is out spoken and just occasionally foul mouthed. Dave, who I had taken as being English when we first broke the ice over a pint in the hotel bar that morning, had turned more and more Welsh drink by drink. By the end of the evening he was talking Welsh with an accent thicker than Di the station master. He eventually missed his train and I had hold him up by his collar as he struggled to sign in at the hotel reception.

However before the evening ended we trooped off back to the Gurkha Chef and ordered plates and plates of lovely steaming curries to end the evening with. Happy Birthday to Sir Harry! And Damn eyes if you werenít there!

The Flashman Society holds an Annual general meeting of members. The next AGM is scheduled for Januray or Feburay 2002, mostly likly to be held in Lemington Spa. The inargral meeting was held at the Bryn GLas Hotel owned by David's family, and we still also meeet every October at David's hotel.

A full day of Flashman related trickery and discussion followed by a Dinner in the evening.

Leamington Spa itself is a Victorian City full of interesting places to visit.