I'm writing to let you know that a memorial service has been planned for GMF at St Johns, Smith Square, SW1 on the morning of the 8th July at 11.00am. Itfs planned that the service will celebrate his life and works, reflect the things that he held dear to him, and with content including readings from his Flashman works by Joss Ackland, along with recollections of his time in the military, his love of adventure and comedy, films etc. Speakers include Melvyn Bragg, Sir Max Hastings and the author and critic D.J Taylor. Alex Norton will also be reading from GMF's McAuslan works. The tone is one of celebration and humour and is expected to last for approximately an hour and a half. The celebration is open to all with no ticket invitations required and the family hope that you can come along and enjoy the day!' If you can see that this is posted on the site, plus perhaps an email to members, we'd be very grateful.

A Cumbrian by birth, despite his Scottish name and hertidge, Fraser grew up near the historic city of Carlisle, in Cumbria Northern England near to the border of Scotland in the 1926. Carlisle is a historic city, many famous historical figures are featured in the area's structure and development. The Borderlands - stretching from the South of Scotland and the Eden Valley across to the Cheviot Hills in Northumbria has a bloody and interesting history. 'Hadrian's wall' the Roman wall; their defenses against the wild north, starts not far from Carlisle. Mary Queen of Scots (1542-87) - was incarcerated at Carlisle Castle - and the heroic Bonnie Prince Charlie (1720-88) who led the Jacobite rebellion (1745-46) declared his father King from Carlisle Cross. The author Sir Walter Scott (1771-1832) married his French born wife in Carlisle Cathedral and Henry VIII ordered the construction of the City's twin bastions of defence in the drum towers of the Citadel which can still be seen. It is not difficult to see how Fraser grew up with an interest in history.


From an early age he read historic novels, picking up Rafael Sabatini's Captain Blood when aged ten, aged eleven or twelve he first read Tom Brown's School days discovering for the first time Harry Flashman. He comes from a family of story tellers particularly his Scottish grandmother who told him many historic stories about Scotland and the borders. Fraser went on to perform best at English and History at school, admitts to always being an avid reader, reading anything he could get his hands on. He choose not to follow his parents into a medical profession.


Carlisle of course is home of Carlisle United in Fraser's day football was a game that was played, and the loyalty to your team shown by turning up and shuffling your feet while watching in the cold and rain on a Saturday afternoon, not by seeking out a pub with a satellite dish as is done today. During Mr Fraser's youth Carlisle United won one of their greatest victories thrashing Hartlepool United, (Division 3) 8-0. (1/9/1928) Fraser although not automatically associated with football relates several adventures and misadventures leading a team out for the Gordon Highlanders.(see McAuslan.) Later in life Fraser worked as a sports correspondent.


Fraser was still a teenager when the war in Europe broke out, progressing until December 7, 1941 when the Japanese bombed pearl harbour bringing America into the war. Japanese control and Persecution of China (ever since the turn of the century) had been growing over the previous twenty years with repeated attempts to conquer or annex parts of China. In 1942, Japan cut off the Chinese government's last land route to its allies by seizing Burma and closing the Burma Road. With the reminder of China cut off Japan pushed forward towards India and along the coast to Singapore. After the surrender of Singapore in early 1942 (nearly 20,000 allied troops became prisoners of war when the island fell) a new division was formed to deal with the continuing Japanese threat. The 17th Indian Division, most Indian army brigades were made up of Indian, Gurkha or Sikh troops, the division's 63rd brigade was a British Battalion, the 9th Border Regiment.

Fraser joined the Border Regiment as a young man (just eighteen.) in 1943 and was sent to join Section 9, Company B of the 9th Border regiment in 17th Indian division in India. At the time troops were sent to India one of two ways, Around the Horn of Africa, a long perilous journey where shipping was at risk of German submarines or air attack or at risk of hitting mines for most of the journey, or through the Mediterranean to Sinai. Once in Sinai the troops boarded trains to cross the desert to the Indian Ocean Coast, Stopping long enough to dye there uniforms green.

The Border Regiment 9th as part of the 17th Division fought the Japanese for over 1,100 miles through India and Burma. The 9th Border fought up the Tiddim Road and in the battles round Bishenpur and also in defence of the Silchar Track. The 17th Indian Division fought in practically every major action of the Campaign from the retreat to Imphal, across the Irrawaddy and down the Chindwin towards Rangoon and Victory.

Fraser made Lance-Corporal several times. A rank he consistently was stripped of for loss of such army essentials as Tea urns. Eventually Fraser left his section in the Border regiment, being given the chance to take an officer selection test. He was granted a temporary commission and moved to the Gordon Highlanders, serving in the Middle east after the war. He declined the offer of a permanent commission reflecting that he preferred the active service he had seen during the war to the duties of a peacetime soldier. Recollectons of the Gordons can be found in the McAuslan books

Fraser wrote a well received autobiography of his time in Burma. The book, 'Quarted Safe out Here.' is a personal account of Mr Fraser's experiences in the far east with 17th 'Black Cat' Division; and his introduction to leadership in the field. The characters are alive with Cumbrian humour. The war in Burma is an often overlooked subject Mr Fraser's brings alive the memory of those men who fought in this too often 'forgotten' war. His description of the confusing actions that take place are honest and as he remembered them without unnecessary drama. It is warm, funny, moving and a great insight to human nature and team spirit in the most trying of circumstances. A highly recommended read.

The Borders were not a Elite Regiment. They had fought over a land larger then France, they crossed swamps, climbed mountains, pushed through Jungle, marched across desert plains. They fought for and crossed rivers, at times supplied entirely by air for extended periods. Where defeat was predicted they triumphed.

After leaving the army Mr Fraser started work as a reporter, returning to Carlisle as a Sports corespondent for the Carlisle Journal. During this time he wrote regularly from the touch line at Brunton Park, home of Carlisle United. At the time the great Bill Shankley was just staring his managerial career. (long serving manager at Liverpool FC.)

Fraser decided he had seen enough of journalism. He did not like the way the changes in running a newspaper effected his work as editor. He decided he would write a Victorian novel as a way out of Journalism. He remembered 'Flashman' from 'Tom Brown's School days' and the rest as they is history. Fraser has written a futher ten volumes of the Flashman papers since the first published in 1969. He continues to hint at the potential for many more.

Apart from his extraordinary success with the Flashman novels, he has enjoyed a successful career as a scriptwriter. The Three Musketeers films featuring Oliver Reed, Michael York etc set a new standard for swashbuckling films. His expertise has been sought for other films such as James Bond's 'Octopussy', The Lone Ranger (as yet unmade) and Casanova.

Mr Fraser is a private, modest man who does not enjoy publicity too much. Protective of his work; he still carries out all his own reasearch, proud to be able to say that he has personlly seen most of the places he has written about (most of the world) and investigated the history himself. He is able therefore to report honestly and Accurately, out of a genuine interest and passion whatever the subject.

He enjoys the opportunity to travel while researching for his books, or 'take safaris with his wife' as he once put it. He has been happily married for many years. He is now a grandfather several times over. His books are invariably dedicated to those grand children or to his wife.

For his work as an author over the past thirty years George MacDonald Fraser was honoured with an O.B.E by the Her Majesty the Queen July 1999.

Future plans for Flashman and other works Mr Fraser keeps to himself. Not even his publisher knows what he will produce next. One thing you can always count on where George MacDonald Fraser's work is concerned is that you will never be disappointed, and almost always surprised.

The Light's on at Signpost 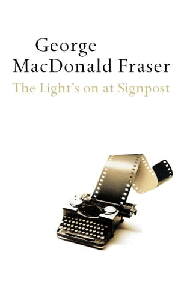 George MacDonald Fraser has been a newspaperman, soldier, novelist ("Flashman"), and screenwriter. In a career spanning 30 years and encompassing films such as "Octopussy" and "The Three Musketeers" he worked with some of the Hollywood greats (Steve McQueen, Schwarzenegger, Fellini, Burt Lancaster, Charlton Heston). Here his reminiscences of those years are interspersed with an "angry old man's" view of Britain today, featuring blistering attacks on New Labour, Brussels and Cool Britannia. 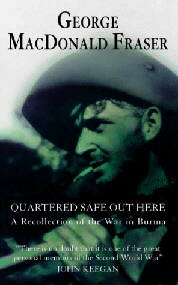 For the three centuries years, what is now Northumberland, Cumbria, along the Scottish Borders, and Dumfries & Galloway rang to the clash of steel on steel and the thunder of hooves; raiding, kidnapping, murder, and extortion an accepted part of daily life. While the Kings of England and Scotland ruled the comparatively secure hearts of their kingdoms, the land between was dominated by the sword. The tribal leaders rading from their towers, 'shook loose the Border.' They continued to shake it as long as it was political reality, They gave blackmail and bereaved to the English language. The stamp of the Reivers is still to be seen on the Border Lands, the names of fortified towns and farms to names that once struck fear into men's hearts - Armstrongs, Grahams, Kerrs, Nixons, Robsons - the legacy of the Reivers lives on.

Debateable Lands - In Search Of The Border Reivers

A jorney through the sixteenth century borderlands of England and Scotland in search of the Border Reivers with George MacDonald Fraser and Eric Robson.