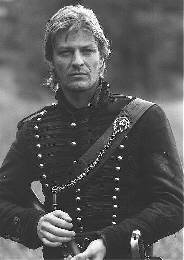 "...damn son-of-bitch was risen from the ranks thankee'!"

Rifle man Richard 'bloody' Sharpe damned dangerous fellow - what? Damn his eyes, just the type of strong, bold and brave fellow who'd be foolish enough to drag you off on a dangerous and deadly mission and no doubt get you your head blown off in the process! Keep well clear of the Impertinent son-of-a-whore, unless you what to end up in the thick of it in the front lines. Flashy would rather stay back home with his feet up at the club nursing a fine Brandy rather than be dragged onto ... or any where near a battle with one resembling that dangerous, fool hardy disrespectful bastard Richard Sharpe!

It 1799, Richard Sharpe is a private in the 33rd Regiment newly arrived in India. They are sent to stop Tippoo of Mysore and drive the French out of India.

On route home from Bombay Sharpe gets caught up in the famous Naval battle at Trafalgar.

Lieutenant Richard Sharpe is planning to leave the army. Against his better judgment, he is persuaded to accompany the Hon John Lavisser to Copenhagen where he gets involved with French actions there.

In terrible winter of 1809 the British army is retreats in front of the French advance into Spain. The 95th is trying to stop french armys. Newly made Lieutenant, a Sergeant picked from the ranks, one Richard Sharpe is given command of 50 Riflemen.

Now Captain Richard Sharpe, perpares to lead his men at Talavera, but he is hampered by Colonel Simmerson. Who dislikes officers risen from the ranks.

During a lull in the campaign Shapre gets the chance to get his hands on some loot and a beautiful female Spanish spy.

In the spring of 1811 the Peninsular campaign still going slowly Sharpe is put in charge of an Irish battalion in hopes that he will put an end to the desertions. An elite French unit commanded by Brigadier Genaral Guy Loup attempts to get revenge on Sharpe.

Following directly from 'Sharpe's Battle' while quartered in the crumbling Portuguese fort of San Isidro, Sharpe and his men are attacked by an elite French unit commanded by the formidable Brigadier Loup, and suffer heavy losses.

A band of renegades led by Sharpe's vicious enemy. Obadiah Hakeswill, holds a group of British and French women hostage in a strategic mountain pass.

A a midnight murder end in the imprisonment of Sharpe. Condemned to die as an assassin, he is the pawn in a plot conceived by his archenemy, Pierre Ducos. Caught in a web of politcal intrigue for which his military experience has left him fatally unprepared.

Sharpe is sent back to England to save his regiment The ringleader know Sharpe is on their trail, and they try to kill him at every turn.

Sharpe finds himself leading a small force of riflemen in support of an ambitious and inept naval Captain's schemes.

It is 1814 and defeat of Napoleon and France seems imminent. Sharpe must fight a different sort of battle. Accused of stealing Napoleon's personal treasure, Sharpe escapes from the British military court and embarkes to clear his name.

1815, The British and their allies are prepare for battle, reluctant newly promoted Lieutenant Colonel Richard Sharpe. Lured back to the army from a rural idyll, Sharpe finds himself on the personal staff of Frederick, Prince of Orange.

1820, Sharpe and Harper find themselves involved with a sea battle off the Chilean coast

Searching this wesite powered by Sitelevel.whatUseek.