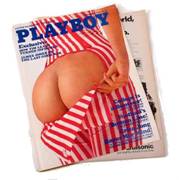 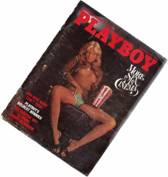 Over the years I’ve lost count of the number of people who told me their introduction to Flashman came through Playboy.  Flashman appeared along side recipes for cocktails and smoked salmon, interviews with great sportsmen and politicians, political and satirical analysis of the Vietnam war, recruitment and the use of drugs; also Ian Flemming’s James Bond, Fredrick Forsyth’s thrillers and or course the lovely bunny of the month - clearly Playboy has changed a lot since the seventies.

I recently asked George if he went to the Playboy mansion to collect is rewards, but he declined, instead his American Agent, a proud upstanding New Englander of fine repute and spotless character went to the mansion to collect awards, meet Heff, and the bunnies.  The agent has never yet confessed even to George what happened.

Playboy Serialised 'Flashman at the Charge' in 1973 in the April, May and June issues.

The serialisation is unabridged, including most of the notes and appendixes and features a few interesting illustrations, collages from various paintings and pictures to depict a period montage of the Charge and .

This time the story features some commissioned illustrations such as the scene (See above) where Flashman seduces Mrs Leslie which are in keeping with Flashman, colourful and humorous.  The November 1975 issue also features a full page ad for 'The Royal Flash movie'. Other fiction includes ribald classics, various satires and Frederick Forsyth's 'No Comebacks'.

Playboy back issues are collectible, these issues for Flashman fans are worth while looking out for.

If Flashman has his origins in the late Sixties and Seventies, Playboy had its heyday then. Unlike the magazines of today these magazines are thick weighty volumes containing two or three serialisations.  Interviews and of course girls - I beg your pardon 'Bunnies'!

and edition are one month out step.